An out of town guest, visiting Savannah and St. Augustine.

My girlfriend flew in from Southern California to visit me this past weekend and though we were in vacation mode, we were constantly on the go. She flew in late Wednesday evening, and I had planned to take her to Ichetucknee Springs State Park to spend a few hours relaxing among nature while floating down the spring. Unfortunately, the weather forecast called for thunder and lightning storms and choosing not to get her electrocuted while visiting my wacky state, I opted to drive her around to see the lovely sites instead. We first headed out to the beach, then went back inland to enjoy a BBQ lunch, buy some yummy cupcakes and the head to a huge used bookstore where my daughters and I regularly shop.

The following day, Friday, we headed up to Savannah, Georgia with my daughters,  my cousin and his wife to walk River Street and meander through the city, enjoying the perfectly manicured and picturesque squares sprinkled every few blocks. We made reservations at The Lady & Sons, Paula Deen’s restaurant, where she was introduced to fried green tomatoes, fried okra, cheese biscuits and Johnny cakes (cornbread pancakes). I did eat 1 fried green tomato, and a couple of the fried okra, but for lunch I opted for the chicken salad sandwich with cheese grits. 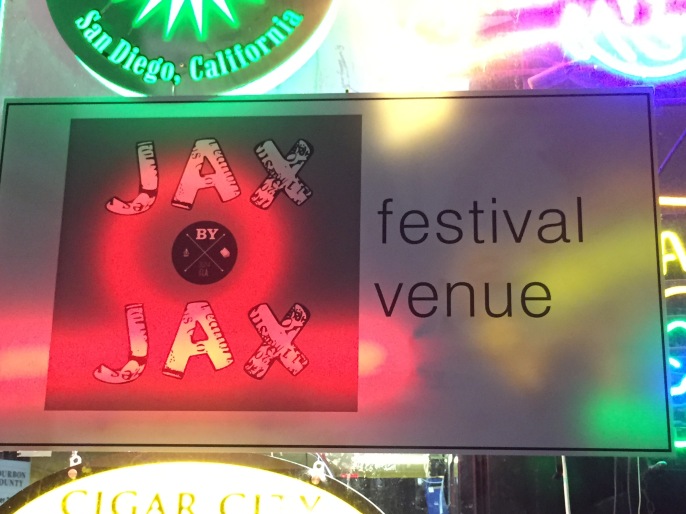 I only ate the chicken salad part out of half of the sandwich and the cheese grits were too cheesy for me (I never thought that was possible), so I only had a small bite. We then ordered dessert, and each of us shared among the table. All together we had banana pudding, key lime pie and peach cobbler. I had a bite or two of the pudding and cobbler and a bite of the pie and was completely satisfied. How drastically different from pre-surgery where I could have polished off my entire meal and dessert and then had bites of everyone else’s dessert. Once our meal was over, we headed back home. We decided to stop at a local department store and I was very excited to discover I could wear capris that are two sizes smaller than what I am currently wearing. They are still a little snug in the calves, but not for long!

Saturday, we headed a little south to the nation’s oldest city, St. Augustine, for a leisurely walk down St. George Street, shopping for trinkets and souvenirs. I usually get fudge when I go to St. Augustine, but I didn’t this time, and honestly other than when we passed by the shop when we first got there, I didn’t even think about it the rest of the day. We stopped at a pizza place where I ordered a Panini and ate about a quarter of it. I brought it home, but it really wasn’t very good the next day.

Finally, on Sunday, we choose to relax and head to the beach! We spent a few hours laying in the sun and playing in the water then headed home to shower and nap for a bit before my cousin and his wife came over for dinner. We decided to treat my girlfriend to a good home-made southern meal on her last night at our house so my husband and I made shrimp and grits for dinner. I have to admit, it was the best shrimp and grits we have made in a while. The only bad part is that I could only eat a few bites before I was done. Of course, that’s really a good thing, and I usually don’t miss foods that I can’t eat a lot of, but shrimp and grits and my cousins home-made banana cream pudding are two things that I would have loved eating full portions of.

I am so happy that my girlfriend came to visit. I truly enjoyed showing her around and catching up with her. I know that she will be very happy to get back to her healthier eating though. I am done eating out for a while, it’s one thing to have left overs at home, but at one point this weekend, my refrigerator was full of to-go containers from restaurants. Most of which ended up in the garbage, because I have a three-day limit on the leftovers I will eat. If I brought home pulled pork on Thursday, I will not eat it after Saturday — it’s just my thing. Eventually I am going to have to convince someone in my family to split meals with me, just to prevent wasting so much food, it hurts my heart as well as my wallet.

All-in-all, I think I did well this weekend. Could I have done without the fried okra and the bites of cobbler and key lime pie, sure, but I don’t regret anything and given the opportunity, I would probably do it all over again. Just because I have had bariatric surgery, that doesn’t mean that I will stop living and enjoying myself. A lot of celebratory stuff revolves around food and I don’t see that culture changing any time soon. I have to be responsible for how I handle that and if it means that I have a small bite of something and move on, then I am ok with that.

I know that some people disagree, what are your thoughts?

8 thoughts on “An out of town guest, visiting Savannah and St. Augustine.”