I read an article this evening in the NPhoto Magazine (an independent magazine for Nikon users) pondering the validity of shooting photographs in RAW format. The author argued that RAW files are large and can slow you down if you are attempting to use continuous shooting mode, which is very true. He continues his point by explaining to the reader that todays cameras shoot “smarter” JPEGs and if you shoot RAW, you miss out on some of the amazing tools that todays cameras offer such as Active D-lighting and in-camera HDR.  I’ve listened to YouTube photographers argue their opinions on RAW vs JPEG for years, and I personally like to shoot in RAW format, because I want to have the unprocessed “negatives” allowing me the ability to manipulate the photograph before converting it to JPEG in order to share it on Facebook and Instagram.

That being said, I do not use Lightroom (LR) and Photoshop (PS) to their full potential, I typically import my photos into Lightroom, mess around with the sliders a bit and then export them back into a folder.

Occasionally I will create a work flow between LR and PS if I need to remove a distracting section of the image, which is what I did today. This evening, I took photos of various items in my front yard, including these Crepe Myrtle blooms. When I exported the photos onto my computer, I wasn’t moved by any of the shots I took, so I decided to play around with the processing of the photos, to experiment and maybe learn a few tips and tricks.

In the below image, the out of focus bloom in the foreground is quite a distraction, so I created a work flow, moved my image from LR into PS and used the fill tool to remove the distraction. It’s a little noticeable in the final image, but with the amount of bokeh in the background, it’s passable. 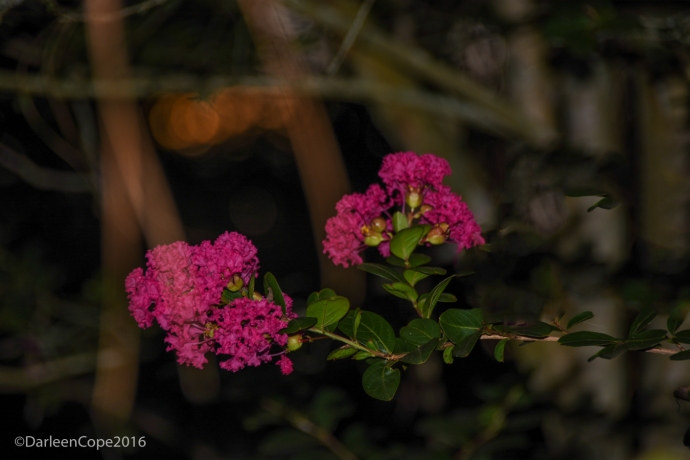 I also decided to play around with the effects setting on my camera, particularly the one called “miniature” but I have no idea what it is supposed to do. Perhaps car tires and streaks of sunset colors across the evening sky aren’t the correct subjects for that specific effect. I suppose I should dust off that big book that I purchased that explains all the bells and whistles of my camera!