No, we didn’t have a baby, at least not a human one.

Today we adopted Sassy, a Rottweiler mix. Malnourished and skittish, she was found wandering the streets of Mexico. She is a lucky girl because a wonderful family who happens to foster dogs found her, gave her a home, spayed her and gave her all of her vaccinations, then started looking for a great home for her. She’s been with them since June and they did a wonderful job getting her ready for a forever home.

Though she’s been waiting for us since June, our part in this story has only been three weeks in the making.  Charlotte and I had been running errands one Saturday when we ran across an adoption event at Pet Smart in La Mesa. During our walk through, Charlotte fell in love with a Shepard mix named Cherry Garcia, she was a sweet dog, and after much deliberation between M and I over text messaging, I filled out an application. Sadly, our application was denied. Cherry Garcia had some severe separation anxiety issues that required her new owners to be with her practically full-time, and well, that just isn’t my family dynamic right now. M and I work, I go to school during the evenings and the girls are in school all day, there was no way that I could be home with her that much.

This crushed Charlotte and the girl at the pet fostering agency felt so bad, she told me that our application was perfect, and had it been any other dog, we would have been going home with a new friend that day, it just couldn’t be Cherry Garcia. She also said that she would keep our application on file in case we did find another dog that we wanted. So, as any good mom would do, as soon as we got home I checked out the agency’s website and Charlotte and I found a few dogs that we felt would be acceptable additions to our family. Now, we just had to convince M that it would all work out.Luckily, that wasn’t very difficult, because even though he didn’t grow up with pets, he has been converted to a dog person, and I honestly don’t think that he can ever imagine life without one now. He picked the two that he liked the most; a German Shepard, and a Rottweiler, and I sent out the email. Sassy’s foster mom wrote us back right away, we never did hear back about the Shepard. 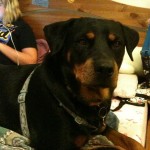 Corresponding with her foster mom, we made arrangements for her to bring Sassy up so we could meet her. It was love at first sight. She’s a sweet dog, and very loving but it takes a while for her to get used to other dogs, which is a problem considering we have two other dogs already. It’s been ok though, we are introducing them slowly and already she’s already gotten used to our Basset Hound, Daisy, but it’s taking a bit longer for her and our Boxer, Roscoe.  That’s expected though, he’s almost 14 and a bit more territorial than Daisy is, but so far, they are doing well. I’m convinced that by the time our 2 week adoption period is over, we will be one big, crazy, happy family.

I’m not sure we will keep the name Sassy. M had called her Lucy and I liked that, but maybe we should look into something stronger, or sweeter. What do you think?